The folks over at #AHEART4LDN put out a call to crafters to make hearts.

They’re to be given out in London on the 17th June to spread a little love after the recent terror attacks, so there’s still a few days to join in if you’re so inclined*.

I found this supercute sweetheart pattern by Planet June,with nice clear instructions.** Note that it is in US terminology, but helpfully gives the equivalent UK terms at the top.

After a quick brush up on my half trebles, trebles and double trebles, experimented with the PlanetJune Sweetheart pattern with different yarns and central beads for embellishment.

It is no reflection on PlanetJune’s pattern*** that these felt a little sad to me – my colour choice, I think.  They didn’t really say anything about how I felt about London, my home town for 20 years and a place I had truly felt at home. I could embellish them with some round buttons, but that didn’t feel right, and I want to get into the habit of working with what I have in my stash rather than buying more stuff (such as the marvellous teapot buttons I saw someone else using).

Other crafters were using red, white and blue to give the hearts a London relevance so I had a go at that. I also started tinkering around with the pattern, mostly unsuccessfully.

These are a bit more like it, but I’m still not really feeling it.

Then I was searching for the PlanetJune pattern again, I came across a sunburst heart by BunnyMummy, with a nicely illustrated tutorial. It was so happy and cheerful and colourful, and I knew I wanted to make a rainbow version.

Following sunburst pattern, but explanding to 7 colours. Was turning out way too big so I abandoned it. 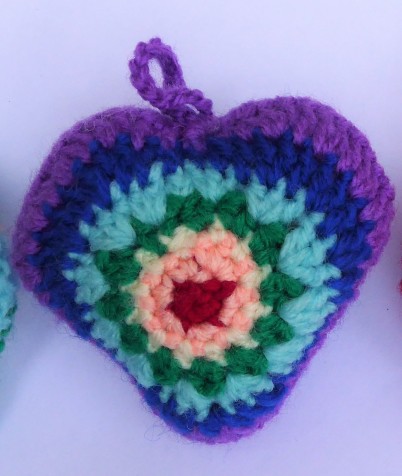 I took everything I’d learned from both patterns, changed some of the stitches down a size or two, wrote my own pattern, and made this one.

Reversed the colours to give the heart a red edge. I also crocheted the two sides together instead of stitching them, which is faster for me, and gave me a chance to put a little picot stitch at the bottom to emphasise the point.

I’ll be sending all the hearts, but I’ll making as many as I can of the red sunburst before I send them off on Wednesday.

I finally managed to express what London was to me – a place of almost infinite possibilities. A city where over 300 languages are spoken. An ever-changing city where one of the buildings is almost a thousand years old. A city where whatever your interest is, you can find a place to pursue it. A city where art, science, and history are available for free in the amazing big museums and peculiar little ones. A city where you can even find spectacular nature if you know where to look.

So the rainbow means peace after the storm, and pretty colours, and LGBQTIA+, and all the variety of people, language and cultures that make up the city. Rainbows and hearts and pretty colours and crochet and softness are all clichés, but clichés can be comforting. I hope the hearts bring a little sunshine to the people who get them.

The road to a rainbow. 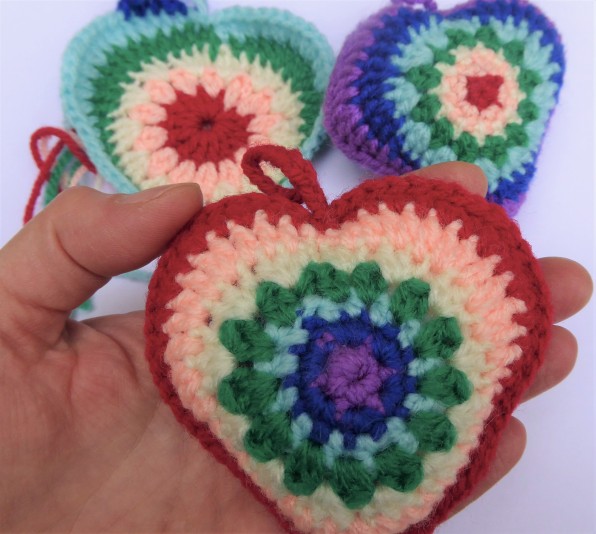 My heart in my hand.

** I did copy and paste it into Wordpad, then do some replaces to turn it into UK terminology.

*** I am hugely grateful to the people who are so generous with their time and creativity to share free patterns on the internet.