I’ve got plans for more basket experiments, but I had a bunch of unfinished crochet critters that needed my attention, so I took a few days to complete them. They’re all made with chunky yarn, mostly with chenille (aka baby blanket yarn). The two rabbits are presents and are made to the same adapted pattern as Velveteen. The two cats are for the Kilometer of Cats & Kittens charity fundraiser, using the free pattern provided. The monster is a new recruit for the Travelling Monsters project. She started out as a square that was supposed to be turned into a rabbit, but the fabric was too thick to make it work.

The gang’s all here! 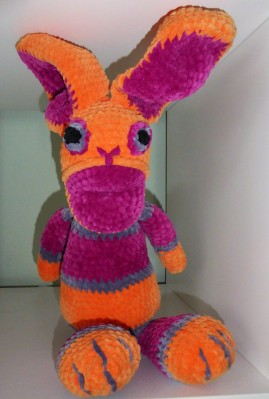 Orange and pink bunny, made from the free Easter Bunny pattern, adapted for chunky yarn.

Made to the same pattern as the orange and pink pattern, but turned out bigger. Maybe the yarn?

I tried to unpick this rabbit’s ear to move it and cut through the stitching on his head. 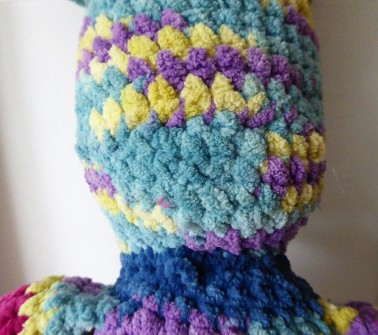 I ended up having to recrochet part of his head onto his jaw.

I stitched the join down, and it looks ok. I also had to darn a hole in the ear, but then couldn’t find where I’d done it to take a photo.

Made from the free pattern for cats and kittens, but in chunky chenille yarn.

Also made with chenille yarn, but this time from Aldi. Turned out bigger than the charcoal one. Even though the yarns looked the same, it’s amazing what a difference it makes. 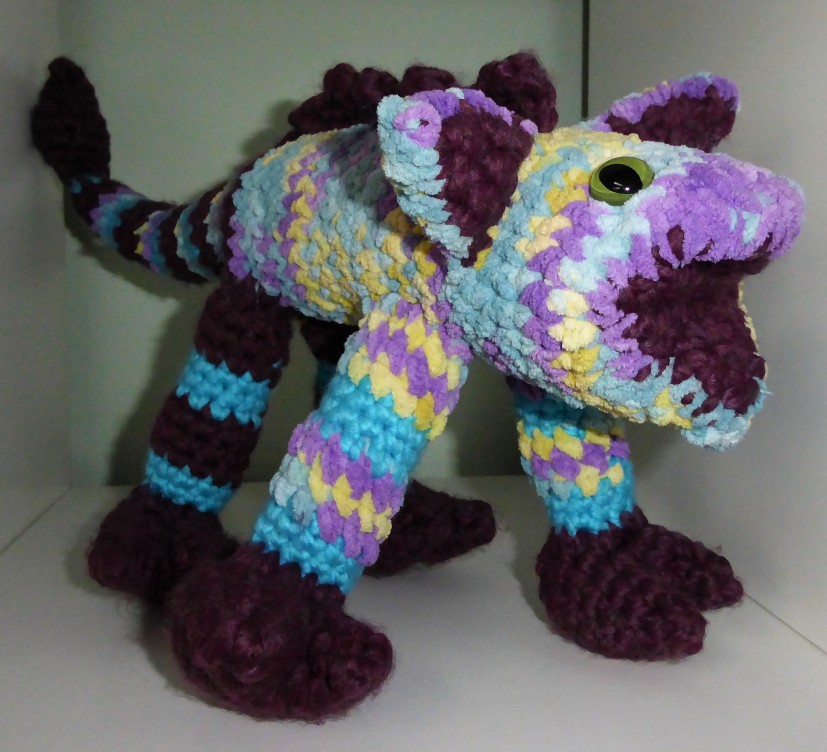 The latest recruit for Travelling Monsters. She needs a name.

Her tail is inspired by scorpions.

I was aiming for the effecct of cloven hooves on her feet. It took me a long time to figure out the best way to do it, which is why she’s been languishing.

Once again, chenille yarn is lovely to crochet with, but a nightmare to unravel,  or to use for sewing or embroidery. I messed up again when unpicking stitches to move arms and ears on the rabbits, and cut through the crochet. I ended up having to learn a lot about repair work. Hopefully, their intended humans will still like them.

The monster needs a name, but she will be heading out on her adventures soon.

Now to get my spoons together to start on another rag basket. It involves a little ramp up at the start for me, as I’ll be cutting the rag yarn, with my brand new rotary cutter.