Here’s Emerald, snake #2 for the Alzheimer’s Research World Record attempt. I used a self-patterning sock yarn, so once her head was done there was nothing to do but keep going around in a spiral until she was the right length.

It was an opportunity for me to slow down a little and look at how I was crocheting. There were a couple of extra jerky movements that I didn’t need in each stitch that I concentrated on smoothing out. I also noticed how tense I was in the jaw, shoulders and arms. Crochet shouldn’t take a lot of physical effort, but I had to remind myself to relax with every stitch. I even tried a little bit with my eyes closed, which wasn’t as disastrous as I thought  it would be.

I started her head with a diamond instead of an oval. Start with a foundation row of 11 stitches, and crochet the 3 middle stitches together in each row to get a diamond. 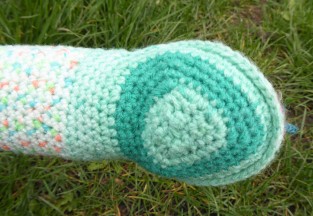 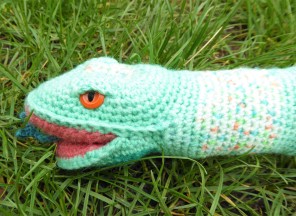 3 pieces needed for head – top, bottom, and piece folded in half for inside of mouth. 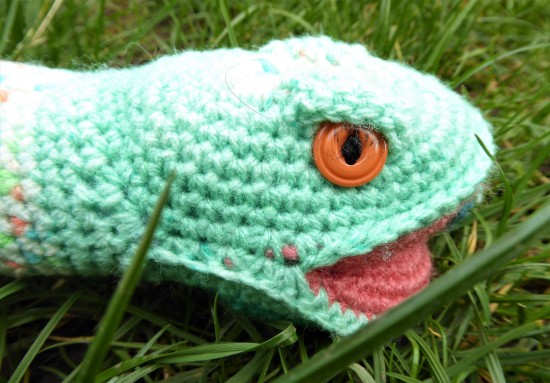 Used 2 hole buttons for the eyes. Stitching them on with black yarn makes effective slit pupils. (The buttons are slightly different as they came from a big random bag.) 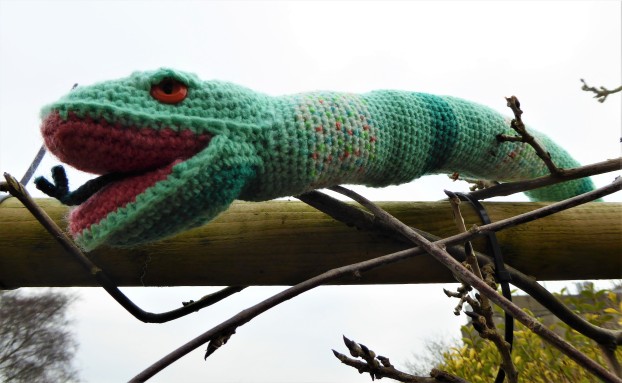 Emerald and Sniddy will be sent out when they have a few more friends to go with them.

Back to Kermit, who seems to have all the right songs.