Here’s 3 more serpents for March of the Snakes.

A while back, I saw this adorable unicorn pattern by Heidi Bears which led me to her African flower hexagon tutorial. I wanted to make a snake with it, and tried out a sample hexagon. I’d need quite a bit more practice to get it right, so in the interest of speed I made Blossom a simple striped snake, and gave her a flower to wear instead.

My attempt at an African flower hexagon. Too gappy, and the shape isn’t quite right.

I messed about with Blossom’s head. I based her on a green tree python

However, I’m not sure it’s worked and I might unembellish her again. (She’ll still keep her flower.)

Spike is even simpler than Blossom. He’s the first one I made with a closed mouth, but I couldn’t resist giving him a little hat. He’s made using crochet spike stitch. His head and body were made separately as I wanted the spikes to go down his body, not up. So I worked his head down from the nose, and his tail up from from the tip, then joined at the neck. 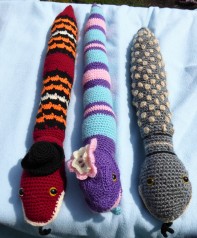 Dotty on the right is made with bobble stitch. The gold yarn is much finer than the grey, so they’d be more like spots than bobbles. She was made all in one piece working from nose to tail, so she’s the simplest of all. 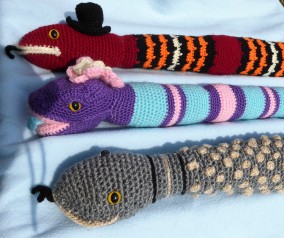 Thanks to Aldi’s random stuff aisle for red yarn for Spike, and grey and gold yarn for Dotty. And thanks to my beloved for buying me some as a surprise!

There’s two more snakes in progress, one with lots of help from the splendid Gaie Sebold. Just 4 and a half more snake-making days to go!