This year I went to Japan with my partner, and my travelling monster, Mr. Bobbles. We spent the first half of our holiday in Tokyo, and then headed off on the bullet train to Kyoto. Here’s a few snaps of what we got up to there.

Fuji-san peeking out from behind the clouds as we sped away from Tokyo on the shinkansen. Remember to ask to be mountainside on the train!

A wander around Kyoto – meeting a new friend. 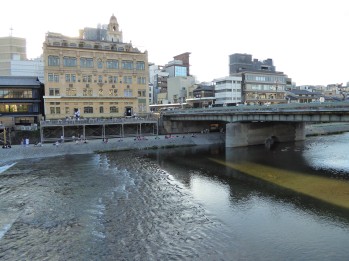 Down by the river.

Egrets, I have a few. Actually, I think they’re cranes. 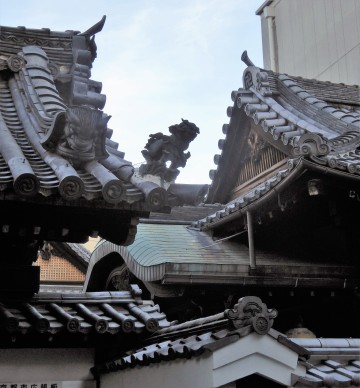 A little temple squished in between a shopping mall and office buildings. 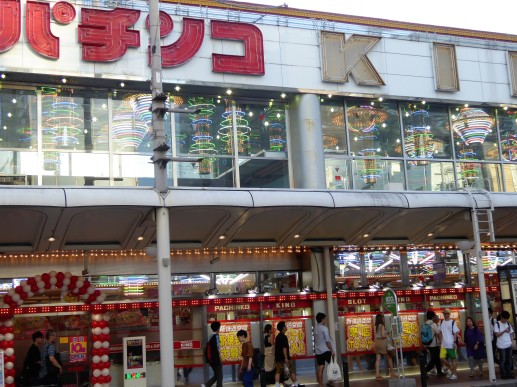 A bit of a contrast from tiny temples to the bright lights of a pachinko parlour.

Inside a shopping mall.

A stationery shop! SO MUCH WASHI.

The sun setting on the river, as a red kite flies overhead.

You know we had to try these! 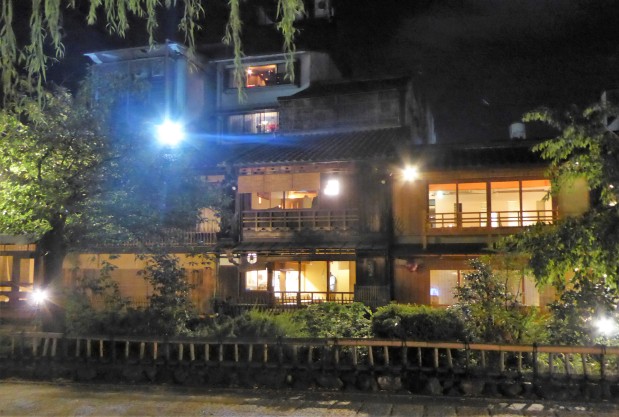 The traditional wooden tea houses lit up at night. These are not cafés, they’re the most exclusive restaurants in town.

Off to the Fushimi Inari Taisha, or Kyoto’s famous fox shrine! Something tells me we’re at the right stop. 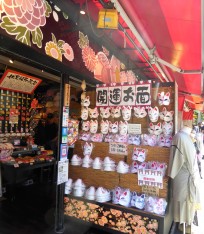 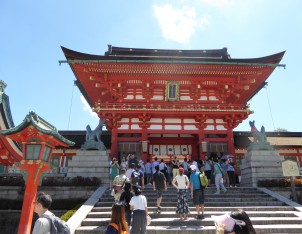 We’re here! The main shrine (go-honden) at the base of the mountain. 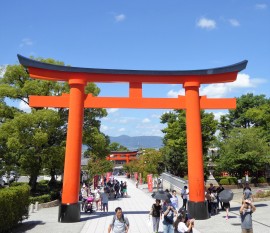 Looking out through the rōmon, (tower gate), down the main approach to the temple.

The first of many foxes, holding the key to a granary.

I think the Hellbeast models her attitude on this one. It’s a pair with the key-carrying fox.

It’s busy at the bottom of the mountain at the main shrine. 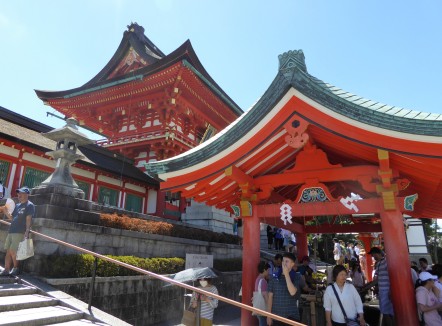 Time to follow the winding path up the mountain to visit the other shrines.

The path passes up the mountain though thousands of these red torii (gates).

Everywhere are pairs of foxes.

People and companies pay to have a gate with their name on it. The fee varies depending on how close to the summit is. It is considered lucky.

There are other shrines and temples away from the main path, and other ways up the mountain. This one winds through a bamboo grove. 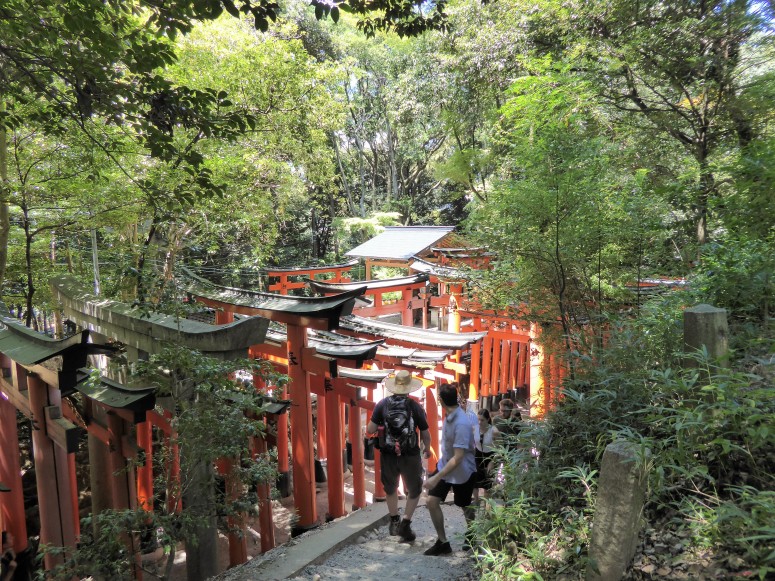 It’s pretty easy to find your way back to the main route! 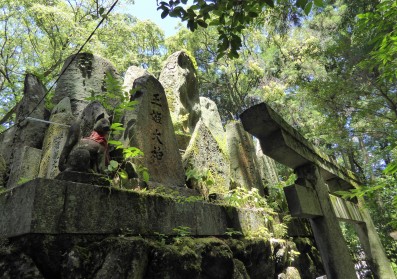 Some of the shrines look so ancient, and like something from a Studio Ghibli film. 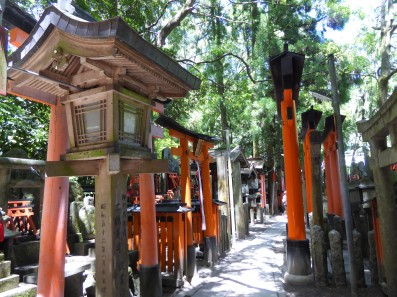 A whole avenue of shrines leading to…

This little shop and shrine! Thank heavens there are cold drink vending machines everywhere on the main path. Because we’re not even half way yet… 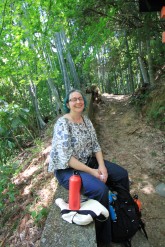 … and this is how I looked. It’s 38C, and humid as hell. There isn’t a part of me that isn’t covered in sweat.

So why do they call this the fox temple again? The little torii are bought from the temple shop. People write their prayers on them and leave them on the shrines.

It gets much quieter the further you go up the mountain.

There are lots of these ceremonial water fountains where you can cool your wrists with a splash of water from the dipper.

Mixing it up a bit with some other creatures.

The shrine flanked by two horses. 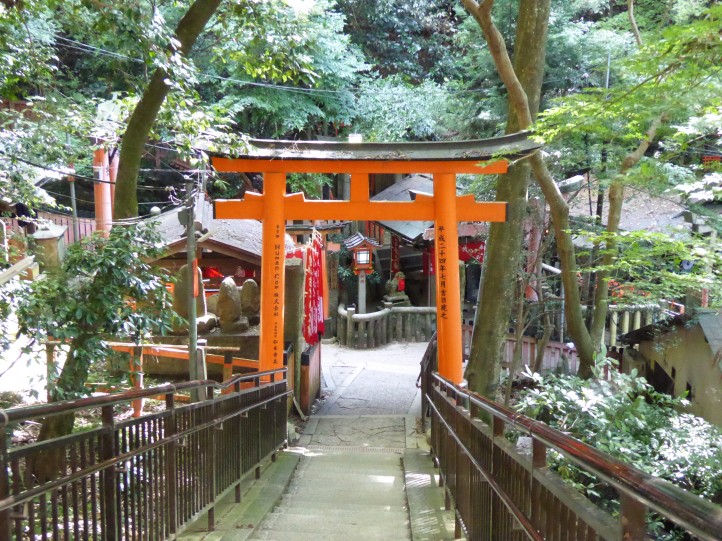 It’s a long and winding road.

I had to have a pic of this fox in a crochet hat!

Hooray! Made it to the top, and there’s a helpful sign to tell you so. I expected a celebratory tea house or at least a medal, but it was very quiet.

Coming back down seemed to take about 5 minutes, and the shrines were rather different. 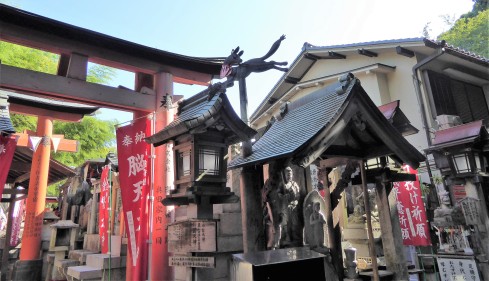 Still a foxy theme, but I think that’s also the Buddha and Tara.

This shrine is covered in little foxes bought from the shrine shop to take messages to the gods. There are also prayers tied to it.

A close up on the little foxes.

A Zen Buddhist temple near the bottom of the mountain. 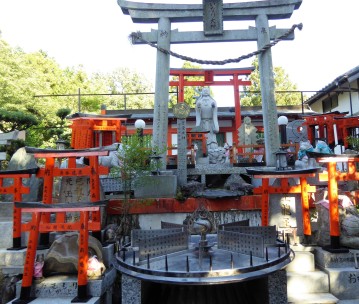 This shrine has the animal zodiac signs. 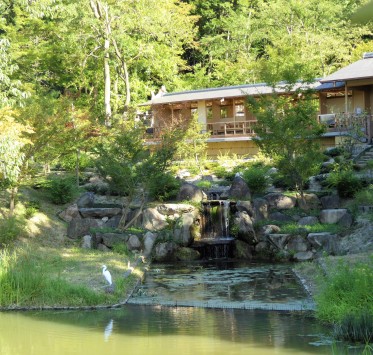 Back at the bottom. A view of a tea house there, with water bird. Phew!

Another wander around Kyoto. 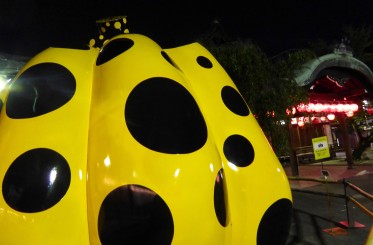 Where we stumbled across one of Yayoi Kusama’s giant pumpkins!

We even spotted a geisha on the way to an appointment!